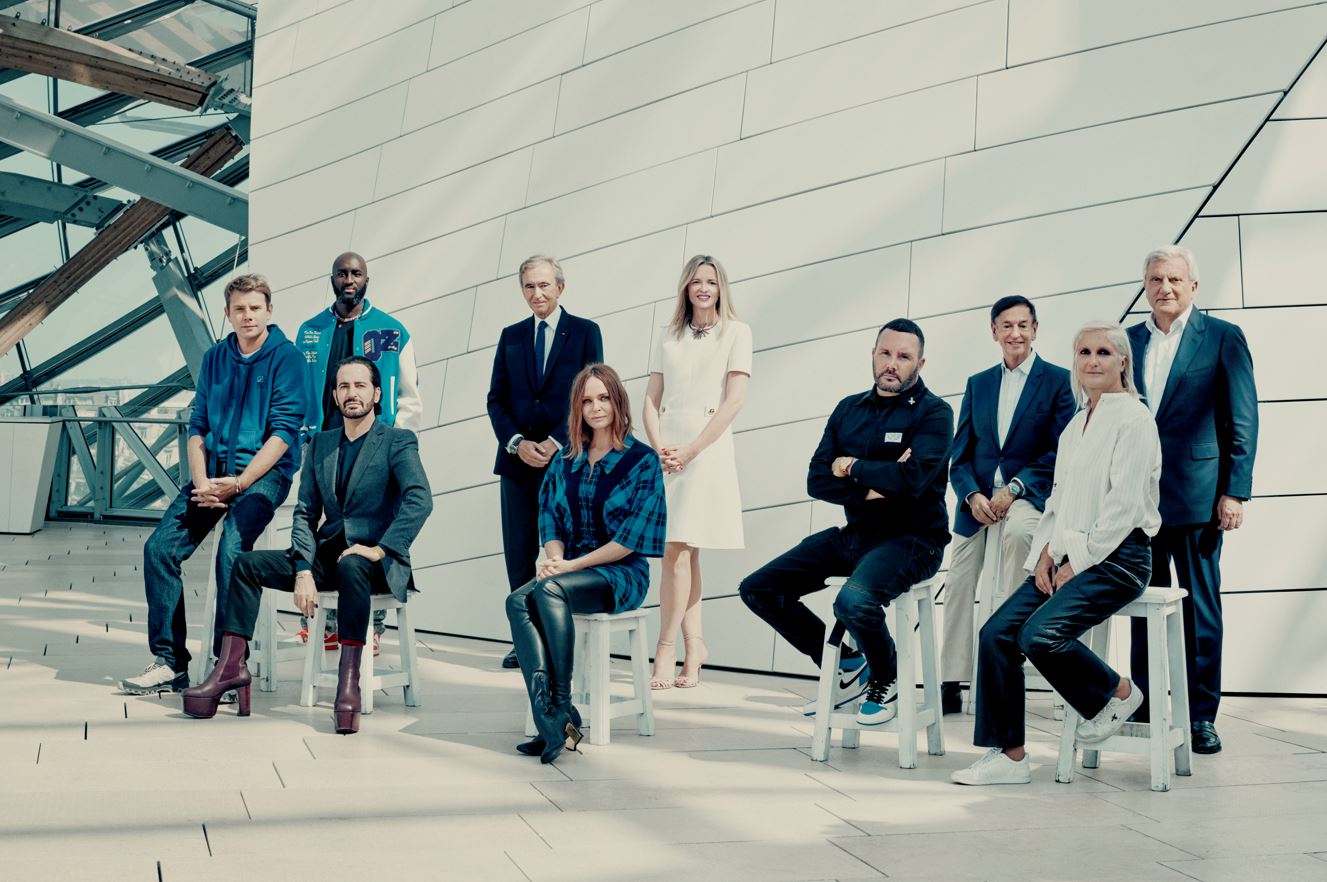 Nigo started his first independent clothing label in Tokyo in 1993 and went on to change the landscape of global street culture.
Working simultaneously in the worlds of fashion and music, with acute sensitivity to detail and through frequent collaboration with some of the best known companies and creative individuals in the world, he has innovated new ways for fashion to relate to its audience that have since become industry standards.
In 2020, he produced a magnificent capsule with Virgil Abloh for Louis Vuitton.

Jonathan Anderson was born in Northern Ireland in 1984. His initial aspirations to become an actor were quickly replaced by a fascination with costumes. He went on to study menswear at the London College of Fashion.

His brand, J.W. Anderson, was first launched in 2008 with a menswear collection, and, in 2010 with his first womenswear capsule collection. The collection was an immediate success. Since, Jonathan Anderson likes to blend his womenswear and menswear into the same show.

In September 2010 he was named Creative Director of the menswear brand Sunspel and won, a year later, the NEWGEN MEN’s catwalk sponsorship for Autumn/Winter 2011.

Jonathan Anderson designed his first ready-to-wear high street collection during his collaboration with Topshop in September 2012, before collaborating with Versus. That same year he won the British Fashion Award for Emerging Talent, Ready-to-Wear.

In 2013, LVMH bought a minority stake into his label and he was named Creative Director of LVMH's Maison Loewe.

Delphine Arnault is a graduate of the EDHEC business school and the London School of Economics. She began her career with the consulting firm McKinsey & Co. before joining the LVMH Group in 2000. In 2001 she became a member of the Executive Committee of Christian Dior Couture, where she has been Deputy Managing Director between 2008 and 2013. In September 2013 she was named Executive Vice President of Louis Vuitton, overseeing all Louis Vuitton product-related activities.

Maria Grazia Chiuri is the first woman to run the creation of Dior. She showed her debut collection of the maison at Paris Fashion Week in September 2016. Her audacious and feminine vision – she uses the word "feminist" recurrently - explores the rules of modern beauty.

She studied at Istituto Europeo di Design in Rome. In the early 1980s, she met Pierpaolo Piccioli and when she joined Fendi as a designer in 1989, she drafted in Piccioli to work alongside her in the accessories department.

In 1999, she joined Valentino as an accessory designer, quickly bringing on board her creative partner. After revamping the brand’s handbag and eyewear collections, they were selected to design its Red diffusion line in 2003 and later given responsibility over the brand’s entire accessories range. They were named co-creative directors in 2008.

In 2015, Chiuri and Piccioli received the CFDA International Award.

Advisor to Bernard Arnault and Director of Corporate Sponsorship at LVMH

Jean-Paul Claverie, after attending both the faculty of law and of medicine, enters Jack Lang‘s office, Minister of Culture and Communication, where he occupies in turn the positions of official representative for international cultural relations and Special Adviser to the Minister himself. Having played an active role in the preparations for the celebrations surrounding the Bicentenary of the French Revolution in 1989, he takes the conscious decision in the early 1990s to make the switch to the world of business. This variety of functions fulfilled in the service of the State has indeed enabled Jean-Paul Claverie to develop an in-depth and innovative view of the role of the company within society as a whole - in terms of the economy, of course, but from the social, cultural and educational aspects as well.

In the summer of 1990, Jean-Paul Claverie had a meeting with Bernard Arnault, who had only recently been appointed Chairman of LVMH, which was to prove decisive. In 1991 he joines LVMH as Adviser to the Chairman. He suggests to Bernard Arnault an extremely original global institutional communication strategy based on culture, creativity, know-how, the art of living, youth and solidarity. For LVMH, this communication is effected by means of large-scale initiatives of general interest and sponsorship, in which the economic success of the Group can bring benefit to the greatest possible number. This innovative approach has two main objectives: to express the values of know-how of French creativity as a player throughout the world in the expression of the French art of living, and at the same time to establish the identity of LVMH by means of projects aimed at all publics, especially young people. 30 major national and international exhibitions will be staged or instigated with the Réunion des Musées nationaux, the Pompidou Centre or the Modern Art Museum of the City of Paris, along with actions to enrich or restore the national heritage. A novel campaign for the benefit of young people has also been running with the inclusion of thousands of young people in academic competitions, study bursaries and educational classes, or again, aid towards the training of young amateur musicians along with assistance for new virtuosi such as Maxim Vengerov in the form of the loan of Stradivarius instruments from the Group's collection.

Humanitarian activities also form an important part of LVMH sponsorship, in the form of support provided for the elderly, for sick children and for medical research.

In October 2006, this development reaches a recent achievement with the announcement of the Louis Vuitton Foundation which will be located in Paris in a building designed by the famous American architect Frank Gehry.

In 1992, Silvia Venturini Fendi, third generation of the Fendi family, joined the company and seconded Karl Lagerfeld in the Artistic Direction.

In 1994 she was given the responsibility of Accessories and then of the Menswear lines.

Jones studied graphics and photography at Camberwell School of Art before enrolling in the MA Fashion course at Central Saint Martins, studying menswear. He graduated in 2002. In 2011, Jones was named the new style director of the men's ready-to-wear division at Louis Vuitton. On 17 January 2018, it was announced that Jones would be leaving Vuitton as men's artistic director, after showing his final collection, A/W18, the following day. On 19 March 2018, Kim Jones was announced as creative director of Dior Homme. In September, 2020 Jones was announced as also taking the role of Artistic Director of Fendi's womens collection, formerly occupied by Karl Lagerfeld.

Stella McCartney founded her eponymous luxury lifestyle brand in 2001. Stella’s approach to design emphasizes sharp tailoring, natural confidence and an effortless attitude. The brand is committed to being an ethical and modern company, believing it is responsible for the resources it uses and the impact it has on the environment. It is therefore constantly exploring innovative ways to become more sustainable, from designing to store practices and product manufacturing. As a lifelong vegetarian, Stella McCartney never uses any leather, fur, skins or feather in any products for both ethical and environmental reasons, setting a standard for the use of alternative materials. Supporting circularity, the brand is embracing new business models that will transform how clothes are produced, sold, shared, repaired and reused; promoting long lasting product with extended use to reduce environmental impact.

The brand now offers women and menswear ready-to-wear, as well as handbags, shoes and a kids line. It has also developed under licensing eyewear, lingerie, swimwear, fragrances and a long-term partnership with Adidas. The collections are currently available in more than 100 countries at wholesale, and through 60 freestanding stores including London, New York, Los Angeles, Paris, Milan, Tokyo, Hong Kong and Shanghai.

He is an Engineer graduate of Ecole Centrale de Paris.

Sidney Toledano spent his early career as marketing consultant at Nielsen International, then he joined Kickers as General Secretary in 1982. In 1984, he was appointed Managing Director of Lancel.

A cookie is a text file that is stored on a dedicated space on your device (computer, tablet, smartphone, etc.) when you visit the LVMH Prize site. This information may relate to you, your preferences or your device and is mainly used to ensure that the site operates as intended. The recorded data generally does not allow you to be directly identified, but can allow you to benefit from a personalized web experience.